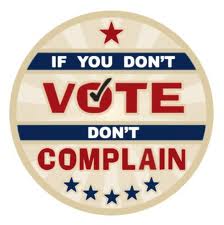 Have you voted yet?? If not, you are running out of time! Election Day is tomorrow, so get your vote in!

Do you feel like it has been a L O N G election season? I DO!  It seems like the commercials and coverage have been exceptionally lengthy this year. The thing I will be most happy to see end though, is all of the political smack talking, and rumor mill going around Facebook. Although I do love a good fact checking challenge... I'm now sick of it. Most of the Romney/Obama "facts" that I've seen going around Facebook are just plain not true or a savvy spinning of words with way more to the story. The danger of it is people often believe what they read from their friends instead of checking the facts for themselves. That's what I don't like.  Don't get me wrong... I love a good chat in person about politics!  I am one of the few people in the world who don't get offended by a different point of view, but political post after political post is just annoying no matter who you are voting for. Has anyone ever really changed their mind based on a friend's Facebook post? I wonder...

Do you think Facebook is the place for politics?  No matter what you think...  GO VOTE!! It's the only way to make your opinion really count. :)

Betsy
I live in Portland, Oregon. I am a 34 year old mom of 2. I love my family & friends, running, working out, reading, boiled peanuts, country music, summertime, my dad's cooking, coffee, gossip magazines, and sunshine. Originally from Georgia, and a long way from family and home. This is my life, as a rain soaked girl from the South...